We’re sharing stories of people who have recently found exciting new roles through Otta. We hope reading about these experiences will show you what it's like to secure a job and be onboarded at a fast-growing tech company.

At Otta, we're laser focused on helping smart, ambitious candidates to find roles at the world's most innovative companies.

Imogen recently started working at sports tech scale-up Peloton as an Account Manager in the Strategic Partnerships team, a position she found using Otta. We caught up with Imogen two months into the role to chat about her experience finding and settling into her new company.

So, how did you end up working at Peloton?

I wasn’t dead set on leaving my previous role, but since the start of the year, I’d been keeping my eye out – it felt like this was the time to leave and do something new. I had recently started using Otta when I came across the Peloton role, and after reviewing the advert and digging more into Peloton as a company, I knew it was exactly what I wanted to be doing.

I applied through Otta right at the beginning of the lockdown (probably the worst time to be applying for a job!). Because of this (and the 400+ other applicants) it took a while to get through the first few interview rounds, but they ended up making me an offer!

Otta was really easy to use. I particularly liked the fact that it tailored the job adverts to me – I’m quite picky when it comes to roles, so I had been waiting for the perfect role and company rather than applying to a few random things and seeing what happened. That said, I found that Otta helped me to access a lot of really good high-growth tech companies that I might otherwise not have seen, all in one place.

What encouraged you to apply for the role at Peloton when it appeared on your feed?

When looking for jobs, I think company-first. I’d been a big fan of Peloton for a long time, always keeping my eye out for roles that I thought I might like to apply to. As I considered my next move, I realised that I wanted it to be more focused on partnerships and the B2B sphere.

Like many, I’d initially considered Peloton to be more of a B2C brand, but the more I learned about it, the more I realised that it was actually a really good fit in terms of my interest and experience. And above all, it was a company I genuinely wanted to work for, so it was a no brainer.

Tell me about your new role at Peloton.

I’m a Strategic Partnerships Account Manager at Peloton, which sits as part of the commercial and sales function of the business. Our team is responsible for strategic partnerships within the UK, focusing on hospitality and leisure, as well as corporate partnerships.

On a day to day basis, I’m responsible for managing accounts and supporting the rest of the team, but we’ve also just launched our first two new corporate wellness partners in the UK, which I was very lucky to be given the responsibility for. It’s been great to have such a big project to work on so early on, and we’re hoping that this side of the business will contribute well to Peloton’s overall performance in the UK.

What was your experience of starting at Peloton?

In general, it’s been amazing! Peloton is by far the largest company I’ve ever worked for (and very different to my previous roles in companies of 20-25 people), but everyone has been incredibly welcoming. Over my first few weeks, I had lots of meetings, each focusing on a specific part of the role, everything from learning about existing accounts to company values and paperwork.

In fact, our team has already expanded in the short time that I’ve been here, so I’ve now helped to onboard new people myself. Having to teach it to someone else has really helped to solidify what I already knew.

What’s the most interesting thing you’ve worked on so far?

I’d say the two new corporate wellness launches I’ve led over the past few weeks. Personally, it’s been great to have so much responsibility from the get go: I much prefer to be thrown in the deep end and just be trusted to get on with things. We’ve also had two new product launches as a company, which was pretty interesting to be on the inside for!

What have you learnt about working at Peloton that you didn’t know before you started?

First of all, I met lots of people throughout the interview process, and I have to say that every single one of them was really helpful and really welcoming. I think that’s why I felt so positive throughout the whole process: I thought ‘I’d love to work with that person’ with everyone.

Even though it’s a company that’s growing fast, and that has thousands of people working for it around the world, every single person I’ve spoken to (I work in a cross-functional role so I speak with a number of teams from the US and International parts of the business) – they’ve all been so helpful, friendly, welcoming, easy to work with. It made it all a whole lot less daunting, and helped us to make connections even though we couldn’t meet in person. It speaks volumes about the company culture that they’ve been able to create.

Found a job through Otta and want to share your story? We'll organise a video interview to learn more about your experience, and then give you £25 in Amazon vouchers as a thank you. If you’re interested, email me at callum@otta.com with a bit about yourself and your new role (a few short bullets is fine!). 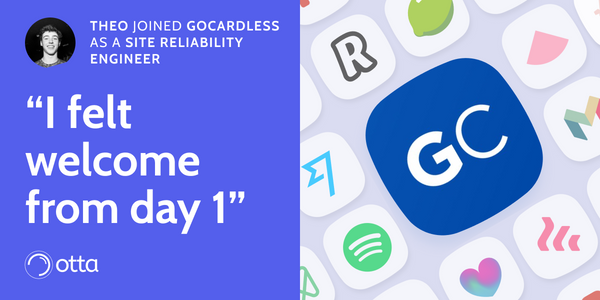 Theo Barber-Bany recently started working at fintech scale-up GoCardless as a Site Reliability Engineer, a position he found using Otta. We caught up with Theo two months into his role to chat about his experience finding and settling into his new company. 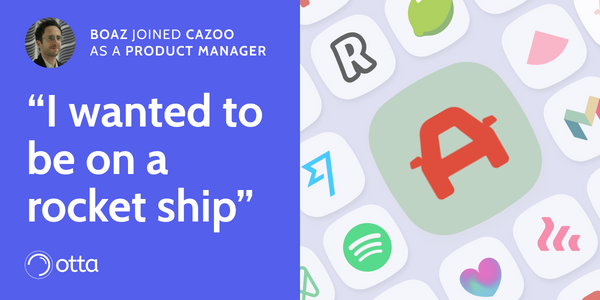 After five years of working in Business Development at various startups, Boaz decided to move into Product Management. He secured his most recent role at the UK’s fastest ever Unicorn, Cazoo, via Otta.